New Year's Eve in Niagara Falls 2021 To Do Canada 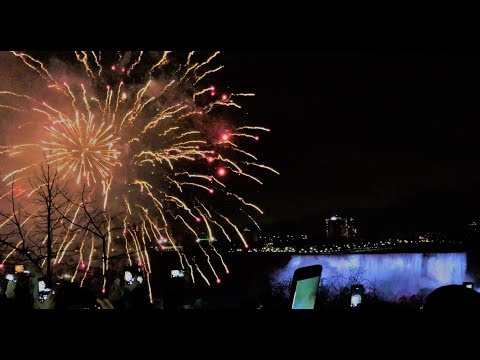 Why NY and not just NYC would be a unique, interesting, and fun FO5 setting

https://buffalonews.com/news/local/senecas-plan-one-stop-gas-station-convenience-store-in-downtown-buffalo/article_5b8b3e6c-2435-11eb-81cd-d752ba49eb38.html#tracking-source=home-top-story-1
Across the street from the Casino Downtown. Corner of Perry/Michigan.
If you ask me, the Senecas can fuck right off with the stunt they've been trying to pull against the City of Niagara Falls and NY State the last few years. Selling their gas and tobacco tax free, to non-Indians, is about as unfair and anti-local/small business as it gets.

Hey niagara!
After the community's warm response to my history posts here pertaining to Clifton Hill and the amusement industry, I thought I'd come to you all with some information I unearthed about a possible attraction lost to time. I hope now maybe your memories could again help fill some gaps in Niagara's rich amusement history.
I was digging around in the Canadian Trademark Database and found the name of the company that Bob Dunham operated the House of Frankenstein and Castle Dracula locations under. For a quick recap, there was chain of six of these attractions across North America, the first and flagship location of both the House of Frankenstein and Castle Dracula being the Niagara locations. The company he ran these under was called Waxattract, and Niagara artist Derek Costello provided the art, figures and animation for these attractions as well as much more.
In 1979, two years after the sixth and final location in the haunted house chain opened (Castle Dracula in Lake George, NY) Waxattract filed trademarks for "Jungleland Golf" and "Monsterland Golf". Both are listed as "For proposed use in Canada." Just a few months later both trademarks were abandoned. A year after that, Waxattract filed trademarks for a Jules Verne attraction with an animated dog barbershop quartet out front as well as an Arby's franchise. A few months later these trademarks were abandoned as well.
For these attractions to have had names and characters trademarked, they must have been far enough into development that art, business plans and structural drawings were likely already partially developed. That's interesting enough, but the story doesn't end there. I tried googling these attractions to find old news articles announcing upcoming attractions or building permits, but found nothing with the exception of Jungleland. In a 2002 growth plan for the City of Niagara Falls, a section discusses the construction of the parking garage for Fallsview Casino. It reads: "To accommodate parking in the event of a closure of the Allandale parking lot at the discretion of the City of Niagara Falls and/or the Jungleland parking lot." Adding fuel to the mystery, Jungleland Golf is the only of the above trademarks transferred to a new owner and renewed after being abandoned by Waxattract. Its transferred to an Herbert W. Cowan in 1980 and not inactivated until 1996.
I can't find anything on Jungleland Golf on the internet. No brochures, merchandise, postcards, photos or references outside of the 2002 growth plan. It's possible for this reason that the municipal parking lot referenced in the 2002 plan was simply the land that was proposed for Jungleland once upon the time, still being referred to as such by the city despite the attraction never being built, even under the trademark's new owner. It's also possible however that this municipal lot referenced was called such by the city because it used to be the land Jungleland sat on, and that this Herbert Cowan ran the attraction from 1980 to 1996 as the records indicate. Adding merit to the theory the attraction existed is the fact that there is a municipal lot about 100ft from the Fallsview Parking garage at the corner of Main and Fallsview. That would have been directly across the street from the Boris Karloff Wax Museum, which was in the parking lot of the Oakes Hotel.
This is significant because as I'm sure you guessed, The Boris Karloff Wax Museum was run by Bob Dunham/Waxattact. In fact, this too was recently unearthed due to a telegram auctioned off online. The telegram was sending condolences to Boris Karloff's wife after the actor's death in 1969 and was sent from Robert (Bob) Dunham of the Boris Karloff Wax Museum. Since the museum opened roughly a year before this, it seems like he owned it from the beginning, making it both Dunham's first attraction and likely Derek Costello's, pre-dating the House of Frankenstein by a year. If he owned an attraction directly across the street from the possible location of Jungleland, it makes sense he would develop more on empty land there after all the space on Clifton Hill was used up.
After heavy digging, I found 2 aerial shots of that area from the early 90s. What's now the municipal lot indeed has a tree filled area with some small structures around it. The photos are not clear at all being taking from the Skylon tower, and one was taken in the dead of winter under a good 3 feet of snow. This makes it impossible to make out any text, logos or even evidence of a mini golf, but whatever is there looks like it couldn't be much else. Does anyone remember this? It's not to be confused with Jungle Putt on Lundy's Ln. near Typhoon Lagoon, the 80s-era mini golf/arcade/Dairy Queen that was abandoned in early 2010s and eventually burnt. Jungleland would have been near the Seagram/Minolta Tower, specifically directly across from the Oakes Hotel and there between roughly 1980-1996, if it existed. Anybody remember anything?

If You See Graffiti Reading "FOR A GOOD TIME CALL:", follow this "Rule of the Road"...

The following contains a transcript from a short radio broadcast that has been picked up by various listeners across the continental United States. Many have been perplexed by its sudden appearance and how it seems to preempt whatever song or radio program they are listening to at the time. It has even been known to appear on streaming programs such as podcasts or Spotify. Listeners have described hearing different episodes and there have been many situations and incidents.
A 23 year old college student named Yuvisela contacted me with her account of hearing the broadcast. She and her boyfriend had encountered the broadcast while driving one sultry summer afternoon from Austin, TX.
So I have this thing with waterfalls. I’m a little obsessed with them. In my free time and when I’m not paying attention in lecture, I like to look on the internet at pictures of them and daydream that I’m there: the roar of the splashing water, the white foamy spray, my bare toes dipped into the icy spring. I’ve got a Pinterest page with hundreds of falls that I would like to visit one day. Niagara, Havasu, Victoria Falls, Gullfoss, Iguazu; they’re all on there. I keep them all catalogued for my bucket list.
Yet, how many people go to the grave with their bucket list hardly finished? I bet a lot.
My boyfriend, Gabriel, likes to mess with me about my obsession. He’ll come up behind me while I’m on my computer or look over my shoulder at my phone and see that I’m looking at waterfalls.
“Don’t go chasing waterfalls, stick to the rivers and the lakes that you’re used to,” he’ll sing when he catches me. It’s this old song he knows, TLC or something. He’s about six years older than me. I’ll joke with him to leave me alone and quit singing that old music, ask him if he used to listen to that on an 8-track or something.
“No, my older sister listened to it on CD. You know CD’s? Those little plastic things with the holes in them? That little slot in your car’s stereo, a CD goes in there. They don’t make ‘em in the new cars anymore.”
We’ve had a variation of this same conversation a bunch of times. It’s kind of a running joke between the two of us—him poking fun at my waterfall obsession and me making fun of how old he is—and while he thinks the waterfall thing is a cute little quirk of mine, he also has been supportive of my passion. That’s why he surprised me with the trip that summer. He knew that I was yearning to see some of these places. He knew that he wanted to make me happy. He knew that my resources were limited. He knew that we weren’t getting any younger; I was 23 and still had a semester to go.
But he also knew that we weren’t getting any richer, either. At least not anytime soon. I know I’m a little bit older for a college student, but it’s taken me a bit longer on account of having to work and stuff. I can’t take a full load every semester. Money’s always tight. I work full time and barely stay ahead, even sending some of my money to help my mom out. Gabriel offered to help me out some and we’d even talked about moving in together, but we had only been together a year at that point and I wasn’t quite ready.
Before my dad had passed, I’d promised him that I was going to get my college degree and I wanted to do it all on my own. While I loved Gabriel and could see myself marrying him, I didn’t want to deal with a transition like that so close to the finish line. Besides, we were getting along so well as it was. Why mess with a good thing?
And it was a good thing that kept better. Just when I thought that I couldn’t love Gabriel more, on my birthday he surprised me with the best present I’ve ever gotten. It was a little black notebook with this kind of leathery cover. While the notebook itself was nice, it was what was inside that was the true present. At some point, he had gone onto my Pinterest page and written down page after page of waterfalls, organizing them by country and state. He had put little squares beside them, boxes to check off. The last two pages were Texas and Oklahoma. He had written a note there. It read:

NOTE: This is FAKE HOCKEY. To talk about actual hockey, go to the latest Daily Discussion thread
 Trade Deadline Tonight will continue TONIGHT!
 The /hockey Trade Deadline Game is back for day 2! Starting today at 8:00 AM MT trading is officially open again. Trading will run until Thursday, January 30th at 6:00 PM MT.
You are not late! You can still sign up at http://www.tdgdb.com
When you are traded, change your flair on hockey-related subreddits and spend the week from January 31st through February 7th cheering for your new team.
Here are this year's reporters, the people who will break news of trade negotiations:
But remember


NO TRADE IS OFFICIAL UNTIL POSTED IN THIS THREAD!

History of Clifton Hill Part 5 (Final): What Could Have Been, and What Can Still Be